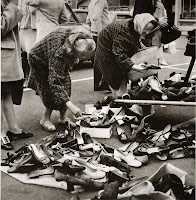 John Minihan is one of Ireland's finest photographers. I've written a series of poems based on his images from his book " Shadows From The Pale ". You will find no truer photographic representations of Irish life, 60's - 80's than these. I thought I had the poems ready to publish 2 years ago. Now, 2 years on, I see they're not there yet.
Anyway if you can get a hold of this collection, do and while you're at it also buy Samuel Beckett - Centenary Shadows. If you've loved a Beckett photograph, it was probably one of John's.
Here's one of the poems, already published in The SHOp:

“ Here y’are John.” She takes the silver.
“She had to leave the bike in Mulhalls,”
“William Featherstone’s gone over, Missus.”
“Not the first time, Tadhg” she says.
“No, nor the last either” says Tadhg
with a bit of a chuckle.

“Mike Deegan has the rest of it in anyway”
says John. “And how’s Breege ?” she asks;
“A lot better than yesterday, but she’ll hardly be right.”
“I suppose not.” says Mrs Clancy
climbing up on her stool at the end of the bar,
“I suppose Maeve will have to do.”

“Wasn’t Maggie Deegan related to the Nealon’s”
quizs Tadhg. “ She was, and Brennans in Clooncraff.”
Terry Watchorne comes in. “How’s Terry.
A pint Terry ?” Climbing off the stool,
over to the tap, lifting her arm, she says
“Wasn’t that awful about Kate Nealon.”
Posted by Michael at 3.26pm Wednesday, November 21, 2007 No comments: 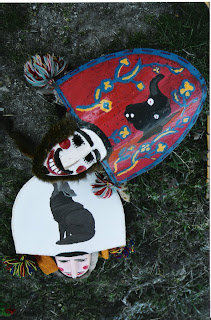 In 2005 a chapbook of poems “Felos ainda serra” was published by AMASTRA-N-GALAR . These were poems I wrote in response to the photographs of Galician Carnaval maskers, felos, taken by Emilio Araúxo. Today I found a newspaper reference to the collection on the net, but, you guessed it, I don’t have a word of Galician.

Here’s one of the poems and, above, one of Emilio’s beautiful photographs

This evening I will leave my mask and crutch,
go to the well, immerse myself
till there is no chill;
till water, moss, sky and I are all one marble.

So when you find me, my love, this smile,
my limbs and fingers will be milk-white;
rosaries will be hanging; petitions,
stuffed between my jaws, fluttering in the wind.

And the reason will hang: a faint quivering
of atoms in the air around you,
an SOS in a register just beyond audibility;
and the mask’s smile: a mouth full of soil.
Posted by Michael at 3.26pm Wednesday, November 14, 2007 1 comment:

I would like to direct you to “Leather-Clad Muted Blue Star”; this is my friend, Sabne Raznik’s blog. It can be found at http://sabneraznik.livejournal.com/. Information about her collection of poems, Following Hope,including excerpts and reviews can be found at http://www.sabneraznik.com/. So call in.
Posted by Michael at 3.26pm Tuesday, November 13, 2007 No comments:

Came across an honourable mention of myself in the NEW HOPE INTERNATIONAL REVIEW
(july '07). It was in a review of the irish poetry magazine,TheSHOp, by Pat Jourdan and can be found at
Posted by Michael at 3.26pm Tuesday, November 13, 2007 No comments:

A symposium to celebrate the work of Pearse Hutchinson will be held in Trinity College Dublin on the 14th and 15th of December this year. Very many aspects of the poet's work and interests will be covered in a very full programme. Check it out.

A well overdue celebration.
Posted by Michael at 3.26pm Tuesday, November 06, 2007 No comments: