I saw my brother

One day, after I was dead, I saw my brother.
He was talking to a neighbour over the wall;
I called out to him, but he didn’t hear; in truth his hearing was poor.
My anxiety rose; I called louder and louder. I could not move,
I was watching him, scanning his profile; and knowing what I know so well,
knew that this was no mirage nor dream, and so, my anxiety quickened.
It is almost impossible to describe the stress: so close, so immediate;
the blood boiling in the veins of my temples. It would not have been so intense
but he was my brother, and had there been fire between him and I, I would have persevered.
But I could not break outside myself, could not come one decibel nearer, even with that heartbreak.
Posted by Michael at 3.26pm Friday, September 29, 2017 No comments:

A Poem: An Image

Roscommon County Council are hosting an exhibition entitled, 'A Poem: An Image', in the Civic Offices in Roscommon which will is running until Oct 20th. It comprises 16 poems written in response to 16 images, and is definitely worth visiting.
My poem, Returning, was written in response to Matthew Gammon's moving and very evocative image shown above.

Houses are funny: boxes really, boxes of memories,
even in decay,
even though the memories are peeling.
The walls, soaked with voices, breathing out their memories
which settle, a fine dust around you.

You, who entered, no longer here;
you, who is here, transfixed in this presence of the past;
an in-between place: you and spirits
and yourself that once was;
and it all settling, a fine dust around you.
Posted by Michael at 3.26pm Wednesday, September 27, 2017 No comments:

Labels: how the war began

The Light of Innocence

The lake: shape of a dress thrown haphazardly onto the ground.
One  evening late, all the people of the village came to divest
themselves of their sins,  washed them into the lake,
which swallowing , simultaneously caught hold of the sky,
held it in a petrified grasp; sky that never had  a care.

Two swans, two mute glories, some distance apart;
two matches  frozen at the point of flaming  appeared on the water
at the precise moment of the immersion. People say
their plumage shone with unearthly brightness.  It is said in the village
that they appear every time a sinner  divests himself of his sin;
that the light is the light of innocence.

Memory of my Father


I have a memory of my father
sitting on a log in the shed,
reading the Sunday Independent
between the lawnmower and the garden tools;
it was his quiet  refuge.

I see him through the open door,
from across a narrow lawn newly mown;
bees are tracing zig-zag lines
between us;
and the lupins are in full bloom.

Summer stretched out over the fields and the railway line,
beyond the gates, out to the Shannon, and beyond;
but Summer is a precarious season.
I like lupins,
they look like Summer.


She had deep brown eyes;

I believe trout swam in their depths.
And I often spent an hour sitting there
with my feet disturbing their surfaces
like rain.

But the currents that stirred her
were much deeper.
They stirred the silt of years
far below,
far below my reflected face.

This little scene in the grounds of a holy well caught my attention.You can almost hear her exclamation, "Holy God!" And, what's gas is, the rest of the family got good steady jobs in the Civil Service. 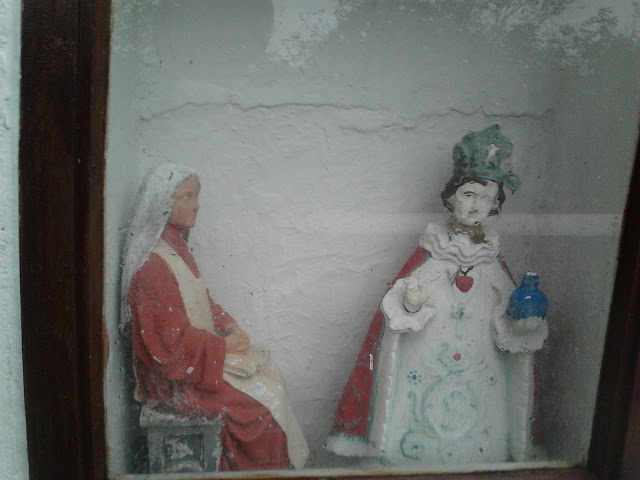 This signpost above a beach gives you a fifty fifty chance of  taking the right direction to somewhere. 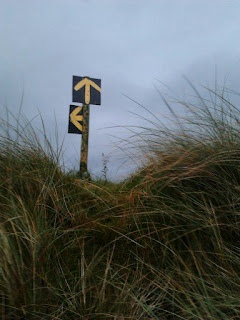 And, this sign at a petrol station isn't unique; I mean I know what it's saying, but I don't think its saying what it means. 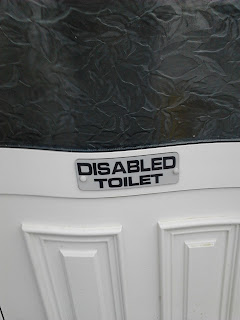 When the clouds
Fell onto the hill with the trees,
And they were sinking,
Sinking;
I thought of you.

The still heads
Belied their stirrings in the murk,
They were swimming,
Swimming;
And I thought of you.

All day long,
Shadows mutely threading that depth,
And they were ghostly,
Ghostly;
I thought of you.

When the sun
At last tore the mist from the trees
they were gleaming,
gleaming;
And I dreamt of you.

Fell onto the hill with the trees

And they were sinking,