Weather and Landscape are One

In this poem I  have, (not for the first time), exaggerated the amount of rainfall we get in Ireland; I tend to for its evocativeness. It creates a sense of the ethereal, lifting the earth into the clouds,  thereby releasing all the spirits of the air onto the land. And I do believe that that closeness to the clouds has fuelled the famous imagination of  Irish writers and story-tellers over the millennia. (Those wraith-like shapes of clouds drifting slowly across fields, through lonely valleys, tangling in stunted hawthorns, could hardly fail to impress lively, often superstitious imaginations).  I also believe that the meeting of earth and sky, its ever-changing panoramas, contributes hugely to the spectacle and beauty of  Irish scenery.


groan beneath sagging clouds;
and if there are spells
of sun-burst in the furze,
they are too quickly muzzled with rain.
Posted by Michael at 3.26pm Saturday, January 31, 2015 No comments:

Labels: a poem about weather and landscape, Irish landscape

Island-hopping on the West Coast of Ireland 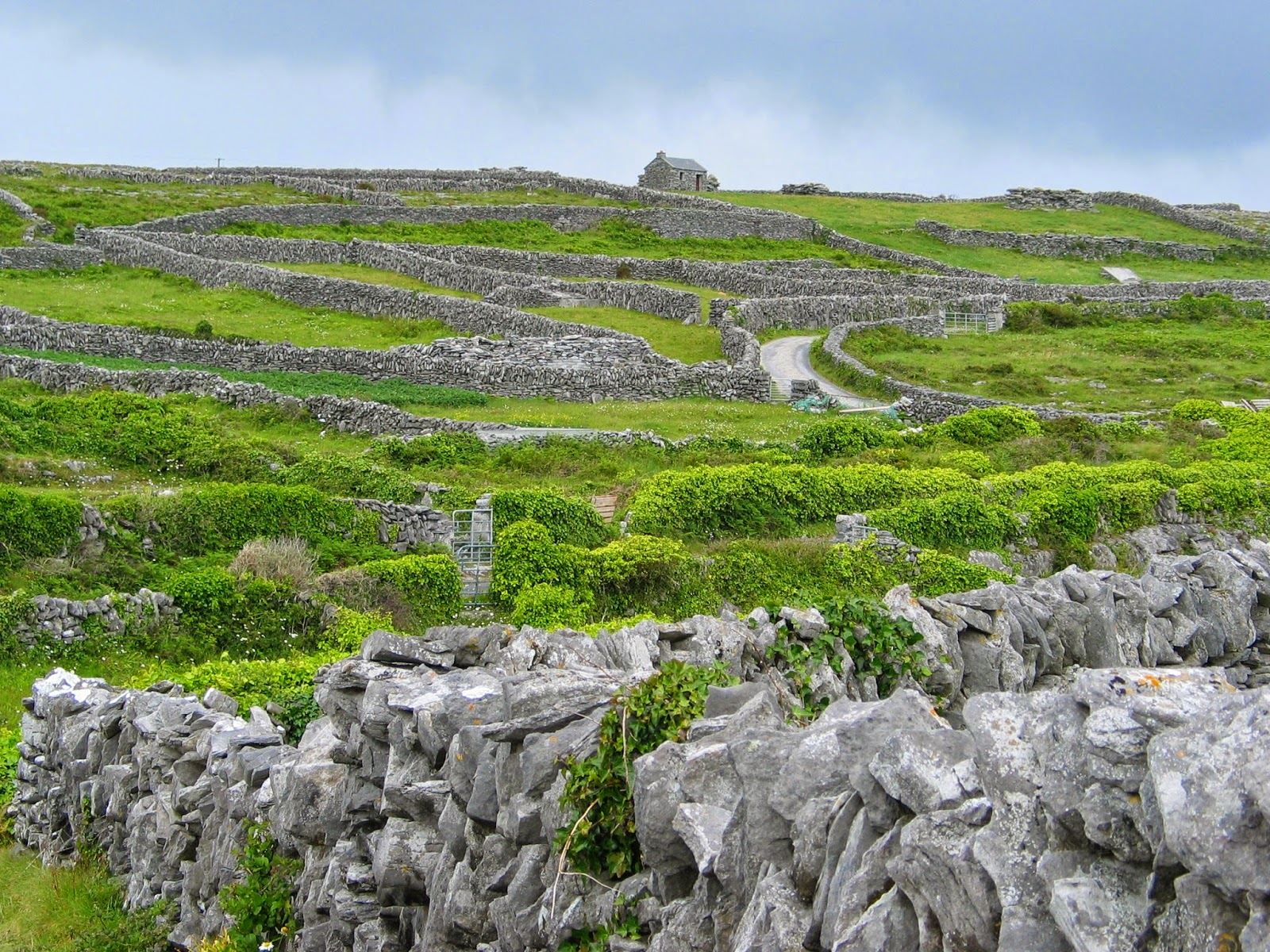 My best holiday ever was spent island-hopping down the west coast. Tory, Clare, Inishbofin, Inis Meain, Cape Clear and Skellig Michael. It’s awhile ago now, but each year since, I have thought about repeating it; now I have made up my mind, this is the year.
But what a decision: I want to see the islands I haven’t seen, and revisit those I have, but there’s not enough money to do it all. Apart from those listed above, I’ve also visited Inis Óirr, Inis Mór , Arranmore, Achill and the islands in Ceantar na nOileán in Connemara.High on the wish list of those not  visited are, Inishmurrray with its wonderful monastic and archaeological remains, Inishturk, Scattery Island in the Shannon estuary and, of  course, the Blaskets ( I’m amazed I haven’t been there yet).
It was August, that last time on Skellig, the gleaming gannets seemed to waft on air currents like fantastic mythical birds, however we managed  to miss the puffins which we would have caught  had we arrived two weeks earlier,  before the end of July. It is hard to imagine that there could be a more glorious excursion on a fine blue July day. And then there’s the other worldly atmosphere of walking between the stone walls on Inis Óirr, the excitement that being in such an unusual  landscape brings. It beggars belief that you are looking into fields that would, sometimes, barely accommodate a standing heifer. Moving up the coast, I have the best of memories of the ‘Club’ on Clare Island very late at night, and the great hospitality we received there; I promised myself I would be back much sooner than this.
Given the wild craggy landscape sculpted by a heaving, often angry Atlantic ocean, the openness of that landscape,the unending skies, the curious constructions left by generations stretching back to prehistory, the ancient culture less damaged  by modernity than elsewhere in Ireland, the special ecologies associated with that strange mix of karst limestone and climate modified by the Gulf  Stream and the particular nature of the people  that live on the  islands, It is not surprising that I should have such an urge to go again.
This poem from ‘Turn Your Head’ refers to a holy well on Inis Óirr. The clear rings on the rock under the water testified to someone’s alternative ‘cash-stream’.


Kneeling down, the jacket off,
shirt sleeves rolled to the oxter,
he slipped his arm into the water,
scooped out the price of a pint,
then thought the better of it
and decided he’d have two.


Then again the following Tuesday
and the following Tuesday too
till there were only clear circles
and coppers on the green bottom,
a bowl in a gap in the wall,
a cross in another with a ladder
of matchsticks and thread.
To  see some beautiful photographs of Inis Óirr  visit
http://www.photojournale.com/categories.php?cat_id=156&sessionid=463f712c16a4224e9ddcd707a3ecf72f&page=2


Click on the slideshow and enjoy, the well is in there too.
Posted by Michael at 3.26pm Saturday, January 24, 2015 No comments:


I have been wanting to write something about Murillo’s ‘Two women at a window’ for a long time. I’m so taken by it, in particular the maid-servant’s expression. It is so natural; so accurate in its depiction of her pleasure and humour, the spontaneity in the moment, in catching her status in relation to the younger woman  ̶  close, very knowing of the young  woman’s life and mind, but subordinate  ̶  . 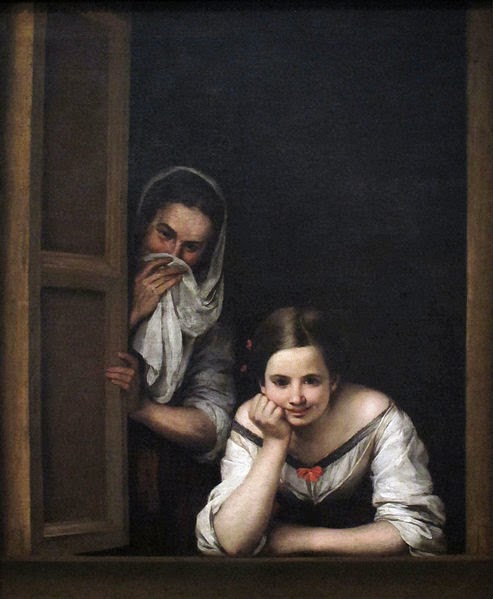 There’s no point writing; there’s nothing I can write that would convey the beauty of the image and the moment more eloquently than time spent gazing at the picture.
Posted by Michael at 3.26pm Tuesday, January 20, 2015 No comments:

A Trip through 500 hundred years of Male self-portraits with thanks to YtelSenda1, from whose YouTube channel I got the following


Or was it love gained, then  happiness;
health and plenty;
an easy humour, carefreeness?
Was nature generous?
Or maybe it was all down to a day
when the blood did not run free.

With the Old Gods Went Gaiety

The Piper's Stones is a name  that has been given to a number of stone circles. The story of piper and dancers being ossified by the gods  for desecration of a holy day is often taken as representing the  more repressive stance that was adopted by the Catholic Church toward revelry of all kinds.


And so he played until the official stance on joyfulness shifted.


That day on Brewel Hill the dancers, kicking up their feet,
angered the gods, who had decreed that music-making was subversive;
and for godliness, jollity was transfigured to stone.
Posted by Michael at 3.26pm Wednesday, January 14, 2015 No comments:


One eye a bog-hole, the other a slab,
bleached blue of childhood memory.


I walk on water, sink in marble,
the thought engulfing me,
I am drowning in its misshapen stare.


and The Rhythm Fountain,


They saw the advertisement


in the Roscommon Herald;


it was in a box under the bed.


The Fountain must have dried up


in the meat factory for years.


he can’t have been that old.


must have stared at his ceiling

A Meeting with Winter

The Cailleach is the goddess of  winter, Bríghde is her summer counterpart. A hag that can appear as a  beautiful young woman; she carries a staff that struck against the ground will cause it to freeze over instantly. She is associated with mountains, hills and cairns; the formation of landscape and the annual cycles and renewal in nature.
The looseness in interpretation of her powers, the large number of legends that surround her, her symbolism in relation to ecology and the state of the earth today, the leeway one has to represent her in  myriad ways makes, (and has made), her rich material for writers, poets and artists.
Driving a herd of goats down a gorge:
primeval creatures with colossal spiralling horns,
coarse matted hair, yellow eyes.


Tendrils of hair trailing down her back,
silver streams through the buff tussocks,
the swirled bronze bracken of winter.


Her face, graphite sheet of a waterfall;
eyes, dark crags in its flow;
at its foot a rowan’s red mouth.


A staff held high,
above us hail stones ripened for a fall;
she drove us from the mountain with lashes on our backs.

from Above Ground Below Ground

The first day of 2015 came windy and wet

The first day of 2015 has come wet and windy. I’m looking out at the Bluestacks, their colours, shades of straw, duns and browns, muted in today’s mist; their heads stuck in dusty-looking cloud.
Whatever the weather, this view is beautiful. On sunny blue days the mountains bridge the void between sky and earth. The low sun on crisp, shiny, winter days throws all the undulations on the mountainside into relief, bright swathes of sunlight are trimmed with rasher-shaped patches of shadow while broad expanses of dead  bracken gleam burnished bronze. Other parts of the mountains planted with larch, spruce and fir, have each tree sharply defined, steeples standing in serried ranks, bottle green, grey-brown rusting red. Lower down the slopes, a few angular fields, still clear, are traces of meagre living long gone.
This side of the valley is different. Ragged fields dotted with houses, mountainy sheep and rocky outcrops. If there was a logo for this side, it would be the hawthorn.
The hawthorn, more than any tree, evokes the character of this place. Rugged, resilient, sculpted through hardship; if the grey lichen-covered outcrops could grow into trees, they would be hawthorns. They are scattered up and down the humpy fields, ash-grey or black against the leaden sky. Sometimes their shapes are human-like, cries for help with starved limbs extended or stubborn resistance in the face of razor-edged winds.
But yesterday, the clouds were running, and spokes of smoky yellow sunlight radiated down on Donegal like God’s smile. In the distance Ben Bulben looked mythical in a warm, straw-coloured glow. The clouds were blue-tinted charcoal, some torn, others barrel-shaped; they had their own wars to contend with. Down here the hawthorns, standing bold on the curve of the hill, were transfixed like myself gazing westward, towards those lands of ancient legend.
The world is beautiful. Happy new year.
Posted by Michael at 3.26pm Thursday, January 01, 2015 No comments: