Nothing lands on this plain,
nothing moves
but its seeping emptiness.

At one with nature

The reliance of humans on nature has suffered from the rise of modern religion. The disappearance of deities of the earth and our own elevation into the realms of being made in God’s image has stunted our regard for the rest of nature; nature in the service of man has blinded us to our reliance on it. Ancient societies (and not so ancient, but always disdained for their ‘backwardness’) understood the interdependence very well. Our global and daily desecration of the environment would have been seen as criminal under a different belief system. This poem by Thomas Hardy catches our oneness with nature very well.


Portion of this yew
Is a man my grandsire knew,
Bosomed here at its foot:
This branch may be his wife,
A ruddy human life
Now turned to a green shoot.


These grasses must be made
Of her who often prayed,
Last century, for repose;
And the fair girl long ago
Whom I often tried to know
May be entering this rose.


So, they are not underground,
But as nerves and veins abound
In the growths of upper air,
And they feel the sun and rain,
And the energy again
That made them what they were!

Jacket, shirt and shoes,
his socks and trousers
neat on the bank;
a small crowd watching from the bridge.


He was coming from a game of cards, late,
the winnings in his pocket.
There had been a woman,
they had visited the priest.


But that’s long ago now.
He worked the farm;
a good worker, his neighbours said,
always busy with the tractor.


He lived with his mother,
who cooked his meals and managed the money.
Now she was a great farming woman,
everyone agreed.


I have a photograph of him holding a child,
he didn’t look comfortable;
he sat for a while in the garden
but didn’t stay long.


when apple was eating the worm,


with some clouds, dusty birds;


was spread to the orchard wall.


while cat was a tea cosy


Suddenly dog alarm in the hedge


comes bursting from the undergrowth:


and we stretch out,


and I go back to being a microscope


The lights go out
down our street, through the town, country, world;
all that fits so easily inside a head.


A new light
tipped slightly upward in a glob
of hardened brain tissue:

Here is Annie Laurie from Seamus Begley’s new album, The Bold Kerryman. What a beautiful voice he has.

The song is based, in all likelihood, on a poem written by William Douglas (1672 - 1748), with amendments in the 1850's by Alicia Scott, (Lady John Scott), who set it to music.
Douglas wrote the poem for his sweetheart, Annie. But Robert Laurie, Annie's father, was not in favour of the romance leading anywhere, owing to her young age and Douglas's political views. He, a soldier, was later exiled for his Jacobite allegiances.
Given the beautiful melancholic atmosphere of Begley's rendition, it would be nice to conclude this piece by describing how she died of a broken heart,  and he lived out  his life in total dejection, till eventually they  were buried side by side near Maxwelton brae. In fact, they both found marriage partners and lived long lives. And, well, sorry.........................................maybe I've just ruined it.

Gave me her promise true
Which never forgot will be
And for bonnie Annie Laurie
I would lay me down and die.

Her brow is like the snowdrift
Her neck is like the swans
Her face it is the fairest
That ever the sun shone on.

That ever the sun shone on
And dark blue is her eye
And for bonnie Annie Laurie
I would lay me down and die.

Like dew on the gowan lying
Is the fall of her fairy feet
And like the winds in summer sighing
Her voice is low and sweet. 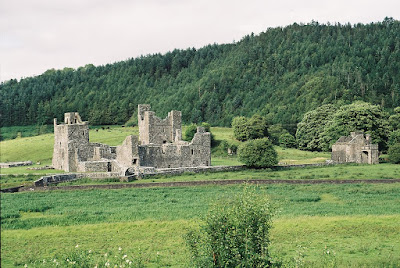 This is Fore. It is one of the few places I know where a stone building sits as comfortably into natural surroundings as though it were a limestone outcrop. Fore is a place of outstanding beauty; the ruined Benedictine abbey actually succeeds in drawing  attention to the peace and beauty of the valley around it. The immediate impact comes from its lack of commercialization; it comes on the traveler as something magical, something that  rose from the green fields beneath it. There was a time when Clonmacnoise had the same magic, but poor and tasteless development put an end to that.
Consequently,(and not surprisingly), some magical myths have grown up around Fore. Here are the 7 wonders of Fore: the monastery in the bog, the mill without a race, the water that flows uphill, the tree that has three branches/the tree that won’t burn, the water that won’t boil, the anchorite in a stone and the stone/lintel raised by St Fechin’s prayers.
Posted by Michael at 3.26pm Monday, October 05, 2015 No comments:


The sunlight on the back of your neck,


the page-reflected glow onto your chin,


dimming upward towards your eyes;


all else, darkness around you.

If I’d never seen that you are beautiful;


that day, the light that chose to steal up behind you,


to settle on you  so gently, but dazzlingly;


that light would have been light enough