The Irish language is famous, from bardic times, for its curses; a poor host  got a verbal flaying. Likewise praise can be most eloquent an elaborate.  Declarations of love: off the scale.

James Stephens gives a fine example in  the following poem of a blood-curdling curse.


The Glass of Beer


The lanky hank of a she in the inn over there
Nearly killed me for asking the loan of a glass of beer:
May the devil grip the whey-faced slut by the hair
And beat bad manners out of her skin for a year.

That parboiled imp, with the hardest jaw you will ever see
On virtue's path, and a voice that would rasp the dead,
Came roaring and raging the minute she looked at me,
And threw me out of the house on the back of my head!

If I asked her master he'd give me a cask a day;
But she with the beer at hand, not a gill would arrange!
May she marry a ghost and bear him a kitten and may
The High King of Glory permit her to get the mange.

Dylan Thomas Reading "A Refusal to Mourn the Death, by Fire, of a Child in London "

What an amazing resource the Poetry Archive is! Here Dylan Thomas introduces his poetry in that high-blown way that was the fashion. At the age of 16 he declared himself to be exceptional. He was, but I wonder how many listeners threw their eyes up to heaven, and turned the dial. In truth, listening to many of today's poets, I wonder how many still do. 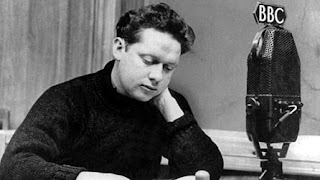 http://www.poetryarchive.org/poetryarchive/singlePoet.do?poetId=7091#
Posted by Michael at 3.26pm Tuesday, July 23, 2013 No comments:

This is where the old men sit,
sacks of coal against a wall;
time to dream
and all their dreams defunct.

A slant of sunlight through the window
like a beam from a projector,
as though, not only heat,
but life itself is somewhere else.
Posted by Michael at 3.26pm Monday, July 22, 2013 No comments:

An Interview with Harold Bloom

This painting by Andrea Mantegna was reproduced in our family Bible. As a boy, I used to look at it and marvel. I still marvel.
It is monumental yet intimate, sculpted stone yet flesh, cold and warm simultaneously. The Lamentation of Christ dates from  about 1480. I imagine Mantegna must have been satisfied with the painting.
It reminds me of an argument I had, in which I maintained the mental process for artist and poet is very similar. Both are striving for a striking composition, new angle, a different perspective; something that make the whole greater than its parts.

This image achieves it from the torn holes in Christ’s feet to the expression on His face, dignity and torture. 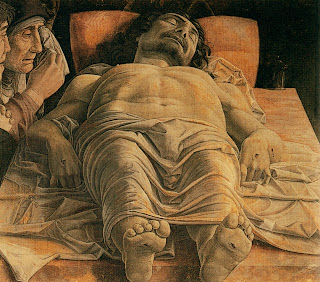 The River Took Me was first published in the Prairie Schooner, Irish Number, December 2011.

The River Took Me


Once, in a sodden flaggered field
beside the river,
the current took me;
not a canoe but a trout,
a water’s flint smoothed by its flow,
a ripple’s almond.


All sleekness and fluidity,
all instinct;
a lidless eye running,
seeing and discarding,
gorged on movement,
passing all argument.
Posted by Michael at 3.26pm Friday, July 05, 2013 No comments:

“Here y’are John.” She takes the silver.
“She had to leave the bike in Mulhall’s,”
“William Featherstone’s gone over, Missus.”
“Not the first time, Tadhg” she says.
“No, nor the last either” says Tadhg
with a bit of a chuckle.

“Mike Deegan has the rest of it in anyway”
says John. “And how’s Breege?” she asks;
“A lot better than yesterday, but she’ll hardly be right.”
“I suppose not.” says Mrs Clancy
climbing up on her stool at the end of the bar,
“I suppose Maeve will have to do.”

“Wasn’t Maggie Deegan related to the Nealon’s?”
quizs Tadhg. “ She was, and Brennans in Clooncraff.”
Terry Watchorne comes in. “How’s Terry.
A pint Terry?” Climbing off the stool,
over to the tap, lifting her arm, she says
“Wasn’t that awful about Kate Nealon.”
Posted by Michael at 3.26pm Monday, July 01, 2013 No comments: